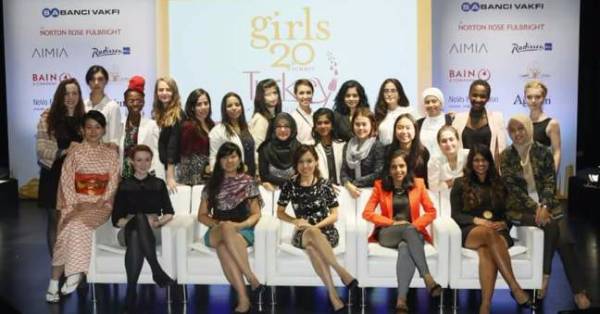 Diletta Luminari (top row, sixth from right) with other delegates at the G(irls)20 Summit

On October 7-8, 2015, JCU alumna Diletta Luminari represented Italy in the annual G(irls)20 Summit in Istanbul, Turkey. Modeled after the Group of 20 international forum, G(irls)20 is a widely recognized platform for young women’s empowerment. The NGO “places girls and women at the heart of the economic decision making process by advancing the idea that increasing female labor force participation will generate growth, stabilize communities and countries, and lead to social innovation.”

Diletta graduated from John Cabot University in 2014 with a degree in International Affairs and a Communications minor. While at JCU she co-founded Ipazia, the first University club dedicated to women’s rights and gender issues. She then went on to complete an Msc. in Migration Studies at Oxford University. On March 8, 2015, she was selected as the Italian delegate for G(irls)20.

In an article published on November 26 in the online magazine InGenere, Diletta explained how the three days of workshops preceding the Summit tackled many issues normally ignored when dealing with female empowerment: the meaning of masculinity and femininity, the role of media in the development of discussions on gender, the need to work side by side with men, and many others.

The workshops and months of preparations for the Summit led to the drafting of a communiqué meant to follow-up on the commitment of G20 leaders to create 100,000 jobs worldwide for women by 2025. Diletta then reflected on how the Summit helped her understand that female empowerment “should not only be limited to politics and legislation, but rather how it actually represents a different approach to life and a different configuration of society.” Moreover, she continued, the Summit helped her find the strength to answer to all those who dismiss the need for female empowerment in Italy. “We are students, workers and women well aware of the difficulties of the real world, and yet we are ready to do our part. We are not naïve, we are brave. There are many of us who want change, and even more who work every day to create an inclusive society,” Diletta explains.

Of her experience at John Cabot, she says, “I will never be able to find the right words to express my gratitude towards those professors and fellow students who have supported me at JCU in this path of personal growth and self-awareness which has then led me to so many great things.”

Read the article (in Italian)