Originally from Sofia, Bulgaria, alumna Ekaterina Soubeva (Class of 2016) majored in International Affairs with a minor in Economics. During her time at JCU she co-founded and was president of the International Relations Society. She was recently awarded the prestigious ‘Mario Possati” Memorial Fellowship for John Hopkins University’s School of Advanced International Studies (SAIS). 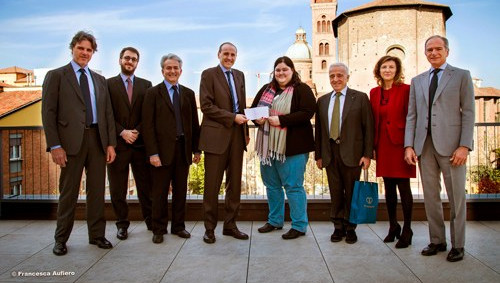 Congratulations on being awarded the ‘Mario Possati’ Memorial Fellowship! What does it entail?
The fellowship honors the memory of Mario Possati, founder and president of Marposs, the worldwide leader in precision equipment for measurement and control in the production environment. Since the 90s, the fellowship is jointly given by Marposs and the Unindustria Bologna to a student from Eastern Europe studying at Johns Hopkins University‘s SAIS, Bologna Center. This year marks the 25th anniversary of the fellowship and I am incredibly honored that it was awarded to me. The fellowship covers full tuition to SAIS for the first academic year in Bologna.

What was the selection process like?
We had to submit a personal statement and a personal profile, which is a CV that also includes future career goals and aspirations. The Memorial Fellowship was officially awarded at a ceremony at Unindustria Bologna on the 29th of March. I had the chance to meet the sons of Mario Possati, who are now in charge of Marposs, and the President and Director General of Unindustria.

What are your expectations of Johns Hopkins SAIS? What are you most looking forward to?
Johns Hopkins’ SAIS is one of the top schools in the world for a Master’s in International Affairs, so after graduation I am hoping there will be many opportunities for professional development. Studying at the SAIS is both a challenge and a privilege. I‘ll have the chance to study with top students from all over the world and to learn from professors who are leading experts in their fields. Before applying to SAIS, I read many articles and research written by these professors, and now I am about to take classes and to discuss world problems and policies with them. I am looking forward to my second year in Washington as well. I am sure it will be as interesting and engaging as my year in Bologna, full of public lectures and debates with some of the best minds in International Affairs today.

What is your career goal?
The Masters of Arts degree at SAIS is very multidisciplinary. We have to complete a concentration in International Economics, which is compulsory for all students, and a second concentration is chosen by each student based on their own interests. I am focusing on Russia and Eurasia, so at the end of the second year I will have some expertise not only on the region, but also in Economics and International trade. Fluency n Russian is also required and I am working on right now.

I have just been accepted for a very prestigious and competitive internship in Moscow with the Russian International Affairs Council, where I will be spending my summer. After graduating from SAIS I want to gain some work experience in the region, with some of the bigger international organizations like the United Nations, the World Bank or the International Monetary Fund. However, my ultimate goal is to become a politician in Bulgaria as I believe that with my knowledge and expertise I can make a contribution to my country.

Why did you start the IR Society? What was your biggest accomplishment as president?
The IR Society is the biggest accomplishment in my life so far. When I came to John Cabot, Prof. Michael Driessen was doing his Pizza and Politics series, which was very popular and still is. Anna Butuzova, the first president of the IR Society, and I wanted to build on the success of Pizza and Politics and expand it to include more events and activities. We received great support and encouragement from both Prof. Driessen and Prof. Lars Rensmann, and decided to start the society. I still remember when we had our first big event with the Iraqi Ambassador, I thought “this project just might work.”

For the two years that I was on the board of the club I saw it grow and become an established and important part of student life at JCU. The study trips that the Society organizes are also very important, as students get a chance to visit international organizations and meet the professionals who work there. This is the main aim of the club: to bridge the gap between professionals, politicians, and students and give them a platform for a constructive debate on contemporary issues.

I like to think of the IR Society as a team so I hope my biggest accomplishment as president was to help the team work together successfully, and make sure the club continued its work in the future. This past year I have been receiving invitations for their events and noticed that the interest in the club is growing, so I think I did my job. I can see that the passion and initiative for the club has been passed on with the support and encouragement of Prof. Driessen, who has been the club’s advisor since the beginning and has always supported every initiative of the society.

Any advice for a new student starting at JCU?
I would advise new students to take full advantage not only of the academic possibilities at JCU, but also of all the events, lectures and debates happening there. Be as active and engaged in student life, activities and clubs as you are in your classes. Whenever I go on an interview for a job or an internship, I am always asked about the IR Society and my work there. The skills you learn from participating in a club are the skill employers are looking for – team work, good communication, organizational skills, and leadership.  The good thing about JCU is that there is a club for everyone, and if there isn’t you can just start one!

One of the things I wish I had done at JCU is learn a new language, especially Italian since it is in Rome. Every new language is useful so don’t miss this chance to learn Italian or any of the other languages taught at JCU. But most of all I would like to tell new students to enjoy Rome and to enjoy JCU, as its location, great professors and international environment make it a very special place. Also, find what you love to do and what you are passionate about. I found inspiration at JCU and this gave me the strength to work hard for my dreams.

Being Part of the Change: Recent Graduate Ignacio Moreno