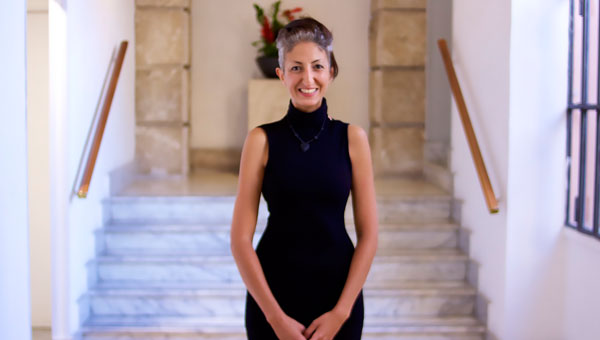 On Monday April 29, 2017 the Guarini Institute for Public Affairs together with the STAND Club hosted a presentation titled “Existence March: Kurdish identity and the political walk for diplomatic recognition.” The presentation was led by Bahar Adanc, a Kurdish woman originally from Turkey, currently a permanent resident of Norway, who has been marching through Europe since 2015 in order to raise awareness of the Kurdish issue.  Her march is also an attempt to appeal to foreign affairs ministries and the UN for support in recognizing Kurds as a protected ethnic group.

Adanc discussed the question of Kurdish identity and indicated the parts of Turkey, Iraq, Iran and Syria where the ethnic group is present. In some regions, especially in southeastern Turkey, Kurds make up over 80% of the local population. Although they are considered a minority, and their  actual numbers are unknown, it is estimated that there are about 37 million Kurds living in the region. Adanc talked about the pacts that came about during the First World War which led Kurdistan to become obsolete, depriving the Kurds of their own land, leaving them vulnerable to the nation-states to which they now belonged, and resulting in their persecution.

Finally, Adanc explained the Existence March. It is a march that she and her friend Saadet Che Demir started in 2015. They visited areas that used to belong to Kurdistan and saw the plight of Kurdish people first-hand. Then they started marching through Europe beginning in Norway, where they had been living. They marched through 7 different countries so far, attempting to give their statement to the respective foreign affairs ministries. They are advocating for the official recognition of the Kurdish people as an ethnic group in order to grant them protection and allow them to speak their language and teach Kurdish in schools without any fear of persecution. Their final goal is to present their statement to the UN in Geneva, which they should be reaching before the end of this year.