“Being in a class with students from 13 different countries inspired me and taught me the value of listening to a variety of perspectives.”
Silvia Calarco, Class of 2016

John Cabot University invited six alumni from all over the world  to a virtual Open Day on May 15, 2020 so that they could share their stories with prospective students and explain how JCU prepared them for graduate studies and the job market. All six alumni graduated from JCU within the last five years. 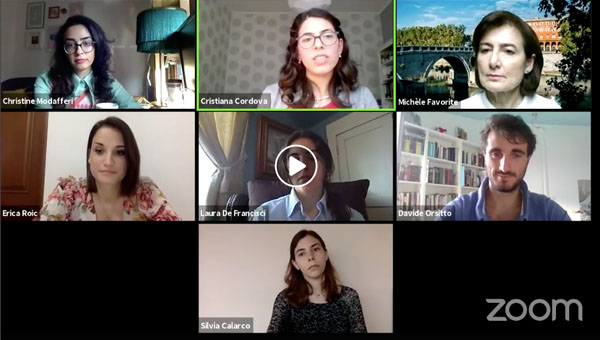 Silvia Calarco, who graduated in 2016 with a degree in Communications and a minor in Political Science, works as a project manager at Magnolia S.p.A, a production company that focuses on the creation and adaptation of popular national shows. After JCU, Silvia earned a Master of Science in Economics and Management of Arts, Culture, Media, and Entertainment from Bocconi University in Milan. “Among the most important things that I learned at JCU are time management skills, setting priorities, and working in teams,” said Silvia.

Cristiana Cordova graduated in 2017 with a double major in Art History and Business Administration. She works as an instructor for the Florence University of the Arts, where she teaches “Marketing Strategies for the Arts.” After JCU, Cristiana went on to earn an M.A. in Art Gallery and Museum Studies at the University of Manchester. During her time at JCU, she was an Orientation Leader and was active in the Art History Society. She also did volunteer work and did several internships that she obtained through the JCU Center for Career Services. “My time at JCU was intense, and it taught me a lot, both academically and professionally. It was a journey of academic self-discovery, but also a deep-dive into a community that taught me how to work in teams and helped me develop resilience, leadership, and team management skills,” said Cristiana.

Laura de Francisci, who graduated in December 2018, majored in Business Administration with a minor in Economics. Since October 2019, she has been working as a production assistant at Ralph Lauren in New York City. Her responsibilities include assessing product potential, budgeting, calculating costs and prices, and liaising with the factory for the production of samples. “I chose JCU because it gave me the opportunity to study in English and step out of my comfort zone while remaining in Italy. I was also drawn to the many extracurricular activities, which helped me develop my time management skills, and were useful for my resume and subsequently my career,” said Laura.

Christine Modafferi graduated in 2015 with a major in English Literature and a minor in Communications. After obtaining her Master’s Degree in Digital Publishing at Oxford Brookes University, Christine was offered a position at Penguin Random House, where she worked as Children’s Publishing Coordinator. She then worked as Assistant Editor for the Children’s Non-Fiction category at Bloomsbury Publishing. Christine currently lives in London and works as Editor for Illustrated books at Scholastic, the world’s largest publisher and distributor of children’s books. She said that JCU helped her channel her creativity into a career, thanks to the advice of Professors Carlos Dews and Michèle Favorite. “My work is about communication, a skill I honed at JCU. I motivate authors and guide their artistic vision,” explained Christine.

Davide Orsitto, who graduated in 2016 with a degree in International Affairs and a minor in Economics and Finance, is currently a PhD candidate in Human Rights and Global Politics at the prestigious Scuola Superiore Sant’Anna (Pisa). His research focuses on welfare state performance and social security ethics. Davide previously worked as Research and Development intern at the Italian Mission at the Organisation for Economic Co-operation and Development (OECD) in Paris, and as an intern in Strategic Market Analysis at Baker Hughes, a General Electric company located in Florence. Davide recalled his rocky start with English and how JCU helped him gain proficiency in the language. His participation in JCU’s Model United Nations club allowed Davide to conferences that took him to South Korea and to Barcelona, where he was able to meet several Nobel Peace Prize winners. “JCU will not leave you alone and won’t let you fail,” Davide told prospective students. “It will give you a solid academic preparation and the chance to make memories that will have a huge impact on your future,” he added.

Erica Roic, Class of 2015, graduated with a major in Political Science and then obtained her Master’s Degree in European Studies in 2016 from Luiss School of Government in Rome. Since then she has worked as an International Affairs and Government Relations expert at Federmeccanica, the trade union federation of the Italian metalworking industry. Erica said that her experience at JCU taught her how to relate to people with different backgrounds and helped her improve her critical analysis skills. One of the first classes that Erica took and that she still has a fond memory of was Public Speaking, which challenged her to overcome her fears and to improve her English.

Closing the event, Professor Michèle Favorite invited the attendees to take a virtual tour of the campus and said, “Our alumni come from very different paths, but the common thread that unites all of them is how they can face the sometime harsh reality of the job market with a competitive edge: the soft skills they learned at JCU and the preparation given to them through the American educational system really make a difference.”

For any questions on the virtual Open Days and the various on-line initiatives that of the University has undertaken, contact the JCU Italian Admissions Team.

Watch a recording of the Open Day (in Italian)