John Cabot University welcomed speakers from across the globe, including a world-renowned transhumanist, Natasha Vita-More, and a distinguished philosopher from Roma Tre, Giacomo Marramao, alongside other prominent scholars and philosophers as well as JCU students and alumni. The workshop addressed the different notions of truth we can still uphold in the age of the posthuman paradigm shift, which has been explored from various fields and perspectives by the presenters.

Natasha Vita-More
Truth? Not without an error-correction playbook. Pursuing knowledge unveils messy cognitive realities that often comfort us rather than challenge alleged facts.  To amend this biological evolutionary error, the instinctive need for meaning could append the frontal lobe’s functions with a tertiary mind that focuses on the present moment, signals unbiased verity and error-corrects while in the pursuit of truth.

Francesca Ferrando
It’s important to dismantle the type of thinking that was previously employed to avoid being stuck in the paradigm of absolute and relative. An appropriate lens to discuss truth is perspectivism, which is multifold in different traditions. Instead of insisting upon the dichotomic paradigm of absolute versus relative, reflecting on these notions from different positions, and not relying on the western canon as a foundation allows us to stay loyal to the human species as a whole. Deep insights derive from the courage that the contemporary COVID moment requires from us; there are aspects of truth that resonate within all of us – interconnection. Let us take this historical moment as a challenge of truth and wisdom. To not be caught in the loops of traditional philosophy, politics and academia, but to think about who you are, where you come from, and where you will go – “you” as a unique conundrum of species, experiences, dreams, and as part of a specific space time.

Dinorah Delfin
We live in an era where misinformation seems to threaten the survival of not just democracies but also the human species. Delfin’s presentation is aimed to inspire the establishment of systems that thrive on reliable, truth-driven information and culture.

Barış Gedizlioğlu
The issue of the truth is best addressed focusing on Aristotle’s analytical logic.

Chryssi Soteriades
There are, and always have been, religious, political, and economic structures framed and presented to us as truths. As critical readers we are able to use the imaginative playground literature offers us to question and rethink the truths presented to us.  Moral values can be explored within stories and storytelling because narratives themselves implicitly or explicitly pose the question, “How should one think, judge, and act—as author, narrator, character, or audience—for the greater good?” Dangerous fictions (presented as a truthful reality) can be compelling and able to mobilize large amounts of capital and effort toward their realization. Therefore, literature is important for creating the emotive engagement and contemplation required to enact a behavioral change in our everyday lives and socio-political systems.

Natalia Stanusch
Natalia’s presentation focused on the recent phenomenon of virtual influencers that rely on an uncanny juxtaposition of digitally-constructed avatars and a photographic representation of the physical “reality.” Virtual influencers are an example of possibilities of the digital image as a medium and A.I., but also of a growing human willingness to embrace integration of digital and physical, as some of the users project their desire for an emotional connection to A.I., to robots capable of empathy, anticipating singularity. We know it is an illusion, but we love it anyway.

Brunella Antomarini
How to overcome the logical paradox of relativism without falling back into universalism and innateness? The best philosophy in this respect is pragmatism (in Charles Sanders Peirce’s version): one truth can be called such depending on its effects, whether the effects are scientific results or human behavior. We do not make decisions based on universal and rational principles, but based on the immediately previous input, upon which we establish dynamic inherent temporary truth-values, constantly exposed to revision (and no need for a progressive value).

Stefan Lorenz Sorgner
It has become implausible to grasp  truth in correspondence to the world , which is the reason why Prof. Sorgner’s talk focused on the issue of truthfulness, which is connected to authenticity. This is a pressing contemporary issue due to the following challenge: does the use of digital media increase the likelihood of inauthentic decisions? There is a widespread worry that digital technologies via social media, advertisement, and politics undermine one’s own authentic interests. This thought often gets explained further by reference to how Facebook was used during the 2016 U.S. elections to influence voters by means of personalized advertisements based upon big data analysis of each individual user. This social challenge is one that needs to be seriously considered. By focusing on the posthuman virtues of truthfulness, mindfulness, and impulse-control, the above-mentioned worry does not have to apply.

Giacomo Marramao
The cognitivist idea that robots and cybernetic machines should simulate and represent the behavior and structure of the human mind has been replaced by the idea that robots and A.I. structures have their own minds and independent cognitive structures. The link between robotics and Artificial Intelligence has determined the growing relevance of a paradigm built on the analogy between the web and plant intelligence: a “reticular” intelligence more effective than animal intelligence precisely because it does not need a centralized control room, like the brain. From here we can trace a pluralist sense of cognition.

Dario Cecchi
Is pluralism still a question concerning the “battle of ideas” and the “overlapping consensus” among citizens of a society, as was affirmed by authoritative philosophers and theorists of politics only a few decades ago? Or has it become a matter of styles and strategies in the use of media, narratives, and images, in the age of what we usually call “storytelling?“ As far as the storytelling is at stake, it is impossible to reduce the political debate to a matter of ideas and opinions that fulfill or don’t fulfill the standards of publicity. It is a matter of technological mediation, as argued by Richard Grusin, that radically, that is, preliminarily, affects emotion and sensibility, as well as cognition, and thus orients the public opinion before speech and logical reasoning.

Massimo Dell’Utri
Universalism and radical relativism are both false, since they start from implausible assumptions. If we bear in mind that when talking about truth we don’t talk about a mysterious entity, but about sentences being true or false (or neither) as they are actually used in our daily practice, then a third path between the extremes of universalism and radical relativism opens up. Our practice shows that truth is no monolithic thing but has many faces, depending on the region of discourse we find ourselves in—empirical, moral, aesthetic, mathematical etc. This is the view called alethic pluralism, the most promising among the recent theories of truth.

Watch a recording of the 5th JCU Posthuman Studies Workshop 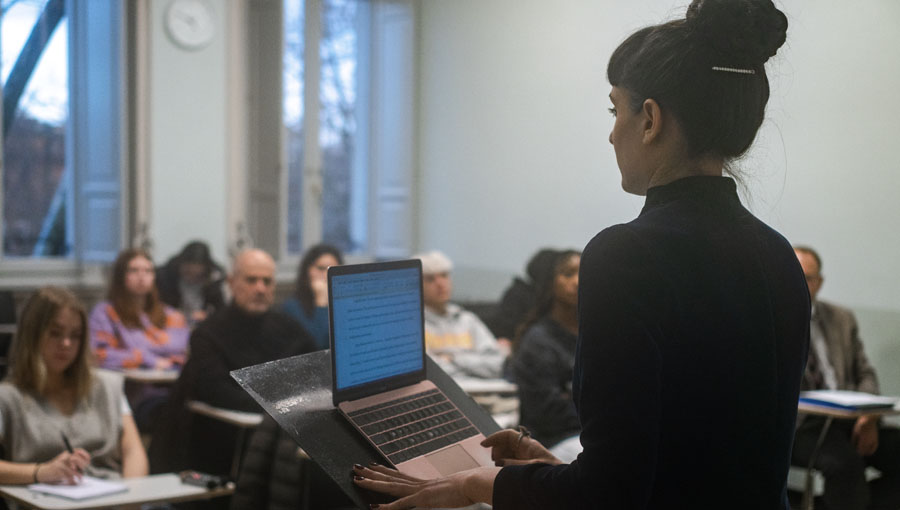 Fashion and Philosophy: A Talk by Professor Gwenda-lin Grewal