Born and raised in Novi Sad, Serbia, Classics Professor Danica Pušić teaches Latin and Ancient Greek at JCU. She is a Ph.D. candidate in Linguistics at Scuola Normale Superiore di Pisa, and she is also the official translator and interpreter at the Rome Criminal Tribunal (Italian – Serbo-Croatian; Serbo-Croatian – Italian).

Classics, the Best of its Kind: Professor Thomas Govero

Classics Professor Thomas Govero has taught at the high school and college level for over twenty years. He has taught classics at John Cabot University since 2003.

After a successful career as a dentist in the U.S. Airforce and Public Health Service, John Caudill enrolled at John Cabot University, where he majored in Italian Studies and minored in Art History and Classical Studies.

JCU alumna Bianca Rondolino presented her first film, “In the Image of God,” at the prestigious Torino Film Festival, which took place this year online from November 28-30.

Marjorie Marino graduated from JCU in 2010, with a major in Humanistic Studies and a concentration in the Ancient World.

Classics as the Heart of Everything: Professor Thomas Govero

Tom Govero has taught at the high school and college level for over twenty years. He has degrees from St. Louis University and the University of Colorado-Boulder. In addition, he was a Fulbright scholar at the American Academy in Rome. He has taught classics at John Cabot University since 2003.

Prof. Bessi on “The Wine Show” 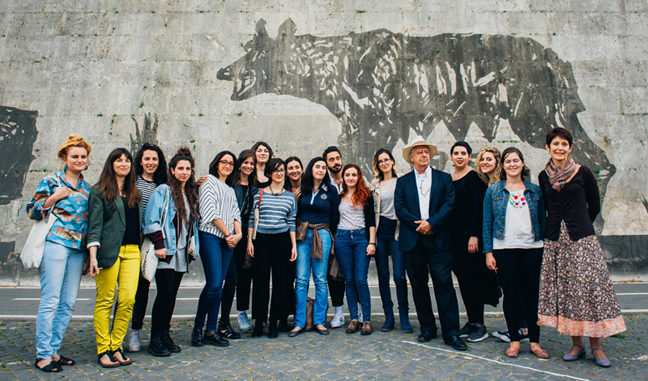 The John Cabot University Theater Society will perform the entirely student-directed production of Agatha Christie's The Mousetrap on March 22 and 23 at 7pm in the Aula Magna Regina.

Thanks to a successful campaign led by the transgender Cambridge student, college officials are rewriting the rules in order to allow women to wear trousers and men to wear skirts at formal dinners.

President Franco Pavoncello, Vice President and Dean Mary Merva, and Vice President Andrea Giummarra praised this year's group of winners, not just for their impressive academic achievements, but also for the many ways in which they have contributed to the growth of John Cabot University.

"We are here to celebrate the success of our students and the special spirit of our community," said John Cabot University President Franco Pavoncello.

JCU Professors Publish in the American Journal of Ancient History

This 600 page volume of the American Journal of Ancient History (AJAH) contains 20 peer-reviewed papers delivered at the conference "The Roman Empire during the Severan Dynasty."

The event was hosted by Professor Benedetta Bessi and her "Wine and the Culture of Drinking in Antiquity" students in the Aula Magna Regina.

Read student Alex Zafran's account of his time spent studying abroad at John Cabot University, and how the cultural diversity he found enriched his experience.

Bridging the Gap: Marking the 1700th Anniversary of the Battle of the Milvian Bridge

October 28, 312 AD marks the date Constantine defeated rival emperor Maxentius near the Milvian Bridge, bringing him one step closer to being the sole ruler of the Roman Empire. JCU's Classical Studies program commemorated this event on May 24-25, 2012 in the form of a conference and guided tours of important Constantinian sites.

On May 14th, John Cabot University held the 40th Commencement exercises in its history, celebrating the Class of 2012 at the wonderful Villa Aurelia, home of the American Academy in Rome and located on the city's Janiculum Hill, overlooking Rome's historic center and the Trastevere neighborhood.

John Cabot University held its annual student award ceremony on April 12th, on Guarini Campus's beautiful Secchia Terrace. President Franco Pavoncello and Dean Mary Merva praised this year's group of winners, not just for their impressive academic achievements, but also for the many ways in which they have contributed to the growth of John Cabot University.

Call for Papers: Bridging the Gap

Call for Papers: BRIDGING THE GAP: Over an Old Pons Milvius Between a New Pontifex Maximus and an Eternal S.P.Q.R.

view all JCU in the News »
MORE FROM JCU